Infrared is an electromagnetic wave with wavelengths between visible light and microwaves, ranging from 760nm to 1000um, and can be roughly divided by wavelength into.

Although the human eye cannot directly observe infrared light, infrared light is everywhere in nature. In addition to ultraviolet and visible light, more than half of the energy of sunlight falls in the infrared region.

The various wavelengths of infrared often correspond to different physical processes and are used in different applications. For example

01 Near-infrared is close to visible light in wavelength but invisible to the human eye. And can be used in conjunction with human-eye safe lasers for illumination or as beacons and is widely used for night vision lighting and communication.

02 Since the vibrational and rotational leaps of material molecules mostly correspond to near-infrared and short-wave infrared energy, the 0.9~2.5um band is often used for spectral analysis, and some gas detection makes use of molecular leaps in mid-wave and long-wave infrared energy.

04 At high temperatures, the main energy of the object's thermal radiation is shifted in the short-wave direction, so short-wave and mid-wave infrared can be used for thermal imaging and non-contact temperature measurement of high-temperature targets.

Infrared spectroscopy analyzes the chemical composition of substances by detecting the interaction of infrared light with molecular chemical bonds, including absorption, emission, and reflection. The typical wavelength range of infrared spectral analysis is 900~2500nm, which mainly reflects the absorption information of multiplication and ensemble frequencies of molecular vibrations of chemical groups containing hydrogen elements. Using the composition and spectral information of a standard sample to build a calibration model, the composition information can be measured from the spectrum of the sample to be tested.

Near-infrared spectroscopy is a non-destructive, rapid detection method, non-polluting to the environment and harmless to humans, and is an analytical technique with broad application prospects. Infrared spectrometers are used to measure samples' transmittance, absorbance, or reflectance spectral curves and are the main equipment for infrared spectral analysis.

Planck's law gives the relationship between the energy of electromagnetic radiation emitted by a blackbody and its wavelength at any temperature. According to Planck's law, the radiation spectrum curves at different temperatures have maximum radiation, and as the temperature increases, the maximum value moves in the direction of short waves.

On Earth, electromagnetic radiation through the atmosphere will be absorbed and scattered by the gas and solid particles in the air, its intensity will be attenuated, and different wavelength attenuation ratio is different. This selective attenuation of electromagnetic waves in the atmosphere is similar to passing through a window of selective filtering of the spectrum, called the atmospheric window. Infrared spectral analysis, spectral imaging, infrared thermography, and infrared temperature measurement all need to consider the effect of the atmospheric window. 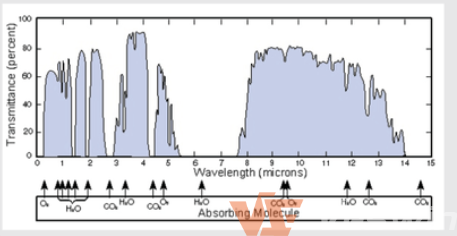 Previous post："Learn about NVIDIA's first server CPUs"
Next post："What is a QPU and how does a quantum processor work?"