Home > Technical News > What are the uses of FETs?

What are the uses of FETs?

Although the field effect transistor and the BJT transistor are both semiconductor amplifier devices, they have many advantages over the transistor. For example, the input resistance is very high, and the current is hardly taken from the signal source. This is beneficial to the stability of the input signal and is ideal for input stage amplification. Device, and also has the advantages of low noise and good temperature stability. It is often used in preamps of audio amplifier circuits, but because it is a voltage-controlled current device, the drain current is controlled by the voltage between the gate and source. The low-frequency transconductance of the coefficient is generally not large, so the amplification ability is poor.

When a field effect transistor is used as an electronic switch, since it only conducts electricity through multiple sons, there is no charge storage effect caused by the base current, such as a BJT transistor. Therefore, the switching speed of a MOS transistor is faster than that of a transistor. For high-current applications, such as the MOS tube used in switching power supplies, it works at high frequency and high current.

Compared with BJT triode switches, FET switches can work at very small voltages and currents and are easier to integrate on silicon chips, so they have a wide range of applications in large-scale integrated circuits. 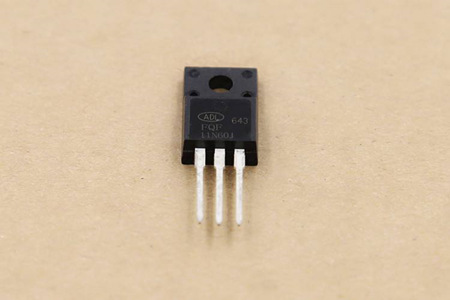 The field effect tube has an amplification effect. Figure 4-29 shows a mos FET amplifier. The input signal Ui is coupled to the gate of the FET VT via CI, and it is superimposed on the original negative bias voltage of the gate to make its drain current I1 change accordingly. A voltage drop is generated on the load resistor RD, and it is transmitted to the mountain after being isolated by the DC by C2, and the amplified signal voltage UO is obtained at the output end. In is in phase with Ui and UO is in phase with Ui. Because the input impedance of the FET amplifier is very high, the coupling capacitor can have a smaller capacity, and it is not necessary to use an electrolytic capacitor.

The FET can easily constitute a constant current source. The circuit is shown in Figure 30. The constant current principle is that if the drain current ID through the field effect transistor increases for some reason, the negative gate voltage formed on the source resistance Rs will also increase, forcing the ID to fall, and vice versa, keeping the ID constant. Constant current Il,

Where UP is the pinch-off voltage of the field effect tube.

FETs can be used as variable resistors. Figure 4-32 shows an automatic level control circuit. When the input signal Ui increases, u results. When it increases, the absolute value of the gate bias UG formed by the negative rectification of Uo through the diode VD also increases, which increases the equivalent resistance of the field effect transistor VT, and reduces the voltage-dividing ratio between Ri and The voltage of the signal entering the amplifier is reduced, and eventually Uo remains substantially unchanged.

What are the precautions when using a field effect tube?

The field effect tube is weaker than the triode, and it is easy to be damaged if it is improperly used. Therefore, pay attention to the following matters when using it.

② FETs, especially insulated grid FETs, have very high input impedance. When not in use, the electrodes should be shorted to prevent the grid from inducing charge and damaging the tube.

③ The gate-source voltage of the junction FET cannot be reversed, but it can be stored in an open circuit state.

④ In order to maintain the high input impedance of the field effect tube, the tube should be protected from moisture and the use environment should be dry.

⑤ When a charged object (such as an electric soldering iron, a test instrument) contacts the field effect tube, it must be grounded to avoid damaging the tube. In particular, when welding an insulated gate field effect tube, it is also necessary to weld in accordance with the source-gate sequence, and it is best to weld after power off. The power of the electric soldering iron is 15 ~ 30W, and the welding time should not exceed 10s.