Yesterday, IC Insights released the top 15 semiconductor supplier forecast list in the world in 2019. Because IC Insights has rich experience in predicting semiconductor manufacturers, from the historical data, this forecast ranking will not be much different from the final actual ranking, and can be used as an important industry situation to understand and analyze data.

In the list of IC Insights, the rankings of semiconductor chips and components (IC and OSD, in which OSD is an abbreviation for optoelectronics, sensors and discrete devices) are still ranked. It is expected that the top 15 companies entering this year will have a sales threshold of $7 billion, which is the same as in 2018.

Overall, sales of the top 15 semiconductor manufacturers in 2019 are expected to fall 15% from 2018, which is two percentage points lower than the original global semiconductor industry's 13% decline. Among them, the biggest declines are Samsung, SK Hynix and Micron, the three major memory chip manufacturers, sales fell by ≥29% year-on-year, while SK hynix will be the biggest drop among the 15 companies, which will reach 38%. .

We can compare this list with the rankings of 2018. 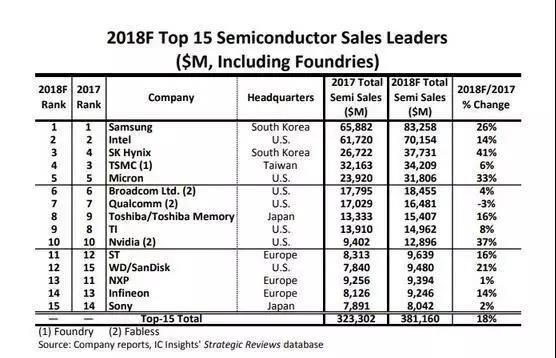 By comparing the two lists, it can be seen that the overall pattern of vendor rankings has not changed. Among the top 15 vendors in 2018, 14 are still in the top 15 of 2019, only the Western Digital fell out of the previous 15, and MediaTek added in. Moreover, the manufacturers of the two blocks ranked 1~5 and 6~10 have not changed, but the positions of each other have changed slightly. It can be seen that after 2018 and 2019, which experienced great ups and downs, there has been no change in the pattern of the global semiconductor industry. The industrial characteristics of the larger Evergrande have once again become prominent.

In the two years of 2017 and 2018, Samsung’s total semiconductor sales were 7% and 12% higher than those of Intel, driven by strong growth in the DRAM and NAND memory chips markets. However, as this year's storage market will fall by 34%, Intel will once again become the world's highest revenue semiconductor manufacturer with its robust product line and development strategy, with sales up 26% more than Samsung.

Among the 15 manufacturers, the biggest one is SK hynix. In 2018, its revenue increased by 41% year-on-year, which was the largest increase among the 15 companies. By the end of 2019, the year-on-year increase of revenue was Negative numbers, and a drop of up to 38%, were the biggest among the 15 vendors. These are also enough to show that the company is highly dependent on the memory chip business.

It is also to see this, SK hynix is increasing investment in the business outside the memory chip, especially in foundry and CMOS image sensor (CIS).

At the beginning of this year, in the face of the downturn in the storage market, SK Hynix announced an ambitious investment plan to invest about 106.9 billion U.S. dollars in the next 10 years. Since 2022, it has started construction of four semiconductor factories. However, in October of this year, the company's Q3 profit plummeted 89%, hitting a three-year low, had to change the previous investment plan, announced that next year's production cuts, while significantly reducing investment. Of course, the investment and production mentioned here are mainly storage chips.

In the case of a sluggish storage, SK hynix has been deployed frequently since 2018. In July, its subsidiary SK hynix SystemIC and Wuxi Industry Development Group jointly established an 8-inch wafer generation. The factory, the new production line will produce analog chips (sensors, power management chips, etc.). At the end of 2018, it invested 10 million US dollars in the Wuxi foundry business unit through SK hynix SystemIC. The new Wuxi plant is scheduled to be completed in the second half of 2019 and will be officially launched in 2020.

In addition, SK hynix SystemIC also established a joint venture with Cypress in Hong Kong in October 2018. The joint venture was launched in early 2019. According to a five-year preliminary agreement, the joint venture will produce and sell Cypress's SLC NAND flash products. Continue to invest in next-generation NAND products.

SK hynix hopes to grow into a comprehensive semiconductor company by strengthening its foundry business and improving its revenue-oriented DRAM business structure.

It is reported that the company has been involved in the CIS business since 2007 and has the ability to provide 8 megapixel products in the short term.

In 2014, SK hynix acquired the CIS company Silicone, which became a subsidiary of SK Hynix with a 100% stake; in October 2016, SK hynix further incorporated Silicone's CIS business operation rights; from 2017, SK hynix has invested more resources in its CIS department, accelerated the development of CIS of more than 13 million pixels, and moved the M10 plant DRAM production equipment to the plant M14, which has room to produce CIS.

SK hynix is a big black horse in the CMOS field, and it has squeezed into the top ten global CMOS image sensor manufacturers in a very short period of time. According to statistics from Yole, the company ranked 8th in the world in 2015.

In summary, SK hynix's multi-pronged business development strategy will become more and more obvious in the case of serious loss in storage business.

European manufacturers are difficult to enter the top ten

Infineon, ST and NXP from Europe's three major IDM companies are very distinctive semiconductor companies: Infineon's power devices are the world's number one, ST's sensors are among the best, and NXP's automotive semiconductors are coveted by many manufacturers. Although the characteristics are distinct, but from the rankings in recent years, especially in the rankings of 2018 and 2019, the top three in Europe have always been difficult to enter the top ten in the world, but basically did not fall out of the top 15. In 2018, the three ranked The top is ST, ranked 11th. In 2019, the top ranked ST is still ST, but the ranking dropped by one, in the 12th.

Moreover, from the list of 2019, the revenues of these three companies have not changed much from the same period of last year, unlike the ups and downs of manufacturers in other regions. This also seems to be consistent with the distribution characteristics of global semiconductor hotspot products, applications and hotspot supply chains. In recent years, memory, processors for consumer electronics, and foundry in the industry chain are hot spots in the industry, and most of the companies that design and produce these chips are distributed in the Pacific Rim, such as Samsung and SK Sea in South Korea. Sony, Sony in Japan, Taiwan Semiconductor Manufacturing Co., Ltd., MediaTek, and Qualcomm and Apple in the United States are all semiconductor companies closely related to consumer devices such as mobile phones, which have huge market capacity, short product iteration cycles and rapid changes. Therefore, their ups and downs are more obvious, and relatively speaking, the European top three seem to focus more on performance-demanding and more stable non-consumer equipment chips, which also makes their business relatively more stable, but it seems Less enjoyment of the huge dividends brought by consumer electronics such as mobile phones, resulting in a relatively low ranking, but the change in revenue is relatively small.

Huawei Haisi is one step worse

In fact, the topic of Hess's top 15 in the world has been going on for more than a year. In mid-2018, it was predicted that Hisilicon would rank in the top 15 of the list of IC Insights at the end of the year, but it was not realized at the time, and it was only one step away. This year, the same is true, as MediaTek’s performance during the year was equally strong, making Hess once again missed the 15th place.

Based on the revenue rankings, IC Insights also ranked the revenue growth of these 15 vendors.

As can be seen from this list, Sony, TSMC and MediaTek ranked the highest, and these 15 only three companies with positive year-on-year growth, especially Sony, increased by 24% year-on-year, and the rankings rose. The fastest, mainly because of the popularity of the CMOS image sensor market this year, the world's largest CIS chip company, achieved strong sales growth, from the 15th in 2018, to the 11th. The details are shown in the figure below. 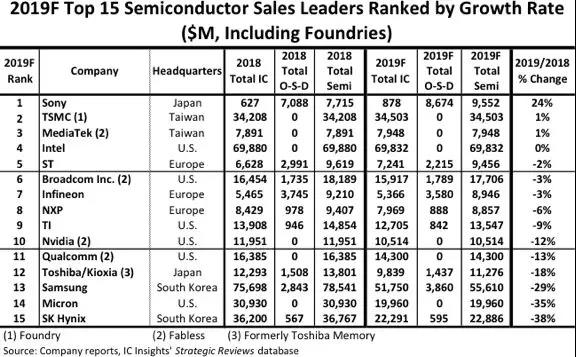 In addition to Sony, TSMC and MediaTek from Taiwan are also remarkable. In the global semiconductor environment, both companies have achieved positive year-on-year growth, although only 1% growth rate, but In the case of a decline in the industry, it has been very rare to achieve such results.

In addition, it is expected that there will be a double-digit decline in sales of six companies this year, including four storage chip suppliers (Samsung, SK Hynix, Micron and Toshiba/Kioxia), as well as Fabless and Qualcomm.

Previous post："Humidity sensor selection and development trend"
Next post："Why does sensor technology dominate the global ams so that it can't fit the Chinese market?"