Several factors that cause car oxygen sensors to fail

During the closed-loop control of the engine using an oxygen sensor, the air-fuel ratio of the mixture is always controlled near the theoretical air-fuel ratio, and there is almost no excess fuel in the exhaust gas. The excess fuel in the exhaust gas will generate a combustion reaction on the surface of the oxygen sensor. On the one hand, the formation of carbon particles causes the protection of the surface of the oxygen sensor to peel off, and on the other hand, the local surface temperature of the sensor element is too high to accelerate. Sensor is aging. 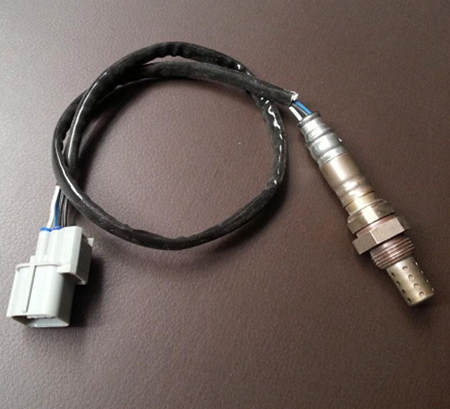 The sulfur in the fuel is burned in the form of sulfur dioxide in the exhaust. The platinum metal catalyst active center has a strong affinity for sulfur dioxide. The sulfur dioxide is adsorbed by the active center and oxidized to become sulfur trioxide. The sulfur trioxide and the exhaust gas Sulfuric acid is combined with water to form sulfuric acid. Sulfuric acid reacts with metal oxides to form sulfates. It reacts with certain compounds in unburned fuels to form sulfuric acid colloids. Finally, sulfur chemical complexes are adsorbed on the active surface of platinum metal catalysts, preventing The catalyst adsorbs oxygen and carbon monoxide, weakens the sensitivity of the oxygen sensor to changes in air-fuel ratio, loses the function of storing and releasing oxygen, and causes the poisoning of the oxygen sensor. The effect of phosphorus and silicon in the lubricant on the oxygen sensor and sulfur Basically similar.

Metals such as manganese and lead in fuels are usually deposited on the active surface of platinum metal catalysts in the form of metal salts and metal oxides. They have a strong affinity with the active center and will not decompose after forming a complex to make platinum metal. The catalyst's activity and selectivity decrease rapidly and cause poisoning. In particular, manganese salts and manganese oxides have the function of storing oxygen. Its deposition on the active surface of platinum metal catalysts will cause false alarms by the oxygen sensor and prevent the oxygen sensor from correctly feeding back the air-fuel ratio. .

On the sensor surface, phosphorus is rarely precipitated in the state of pure phosphorus, but is precipitated in the state of some compound. The phenomenon that these phosphides contaminate the oxygen sensor is called phosphorus poisoning. Phosphides are widely used as lubricants, rust inhibitors and cleaning agents. During engine running-in or after the piston ring wears, the phosphides in the engine lubricating oil additives will enter the cylinder to burn and discharge with the exhaust. At low temperature, the phosphide is precipitated in the form of particles and precipitates on the surface of the protective layer of the sensor to block the pores and cause the sensor to be poisoned. At high temperature, the phosphide will adhere to the surface of the oxygen sensor and the three-way catalyst to make it polluted .

Ageing and poisoning of oxygen sensors are inevitable. Therefore, the oxygen sensor should be replaced after the car travels a certain distance. Usually, you should always check whether the oxygen sensor of the car has failed and replace it in time if problems are found. This is also a guarantee for driving safety, and it can also reduce fuel consumption and reduce environmental pollution.

Previous post："Common maintenance methods of practical inverter"
Next post："What does the CPU do?"